Blogging the Hobbit – Chapter 4: Over Hill And Under Hill

Adventure was promised after our party’s short rest and Adventure is now here! This chapter really serves to get things moving again after the respite of chapter 3: while I was certainly ready for this change, I don’t think our shorter friends quite were. The previous chapter ended with “Now they rode away amid songs of farewell and good speed, with their hearts ready for more more adventure…”. Something tells me that they are regretting those thoughts by the end of this chapter.

Things seem to start off well enough for them. Thanks to Elrond and Gandalf, they find the right paths and are making good progress. But, as the days pass, their road doesn’t seem to be getting any shorter.

And then the storms come.

I really love Tolkien’s description of the thunderstorm, or “thunder-battle”, in the mountains. It’s easy to imagine the lightning flashing from all directions while the thunder cracks echo endlessly off of the rock walls around you, all the while being drenched by cold, hard rain from which you can find no shelter. This is sort of how I imagine camping to be in general so I wonder why people don’t understand why I prefer to avoid that whole thing. It sounds truly horrendous.

And then, as if more troubles were needed, the stone giants show up and start tossing boulders around for sport. I wish I had more to say on the subject of stone giants, but this is the only place that Tolkien mentions them. The well-regarded Encyclopedia of Arda notes the difficulty of fitting the stone giants (and indeed, other giants that crop up on occasion) into the larger universe of Middle-earth. It’s not entirely clear where they came from or what they are. I suppose they have to remain one of the mysteries in Tolkien’s world. But that’s a little unsatisfying.

Still, the giants do not cause much trouble for our friends, though they do provide the final impetus to seek out a nice, dry, safe cave. So perhaps we can blame the giants for the rest of the troubles1.

And then we meet the Great Goblin. 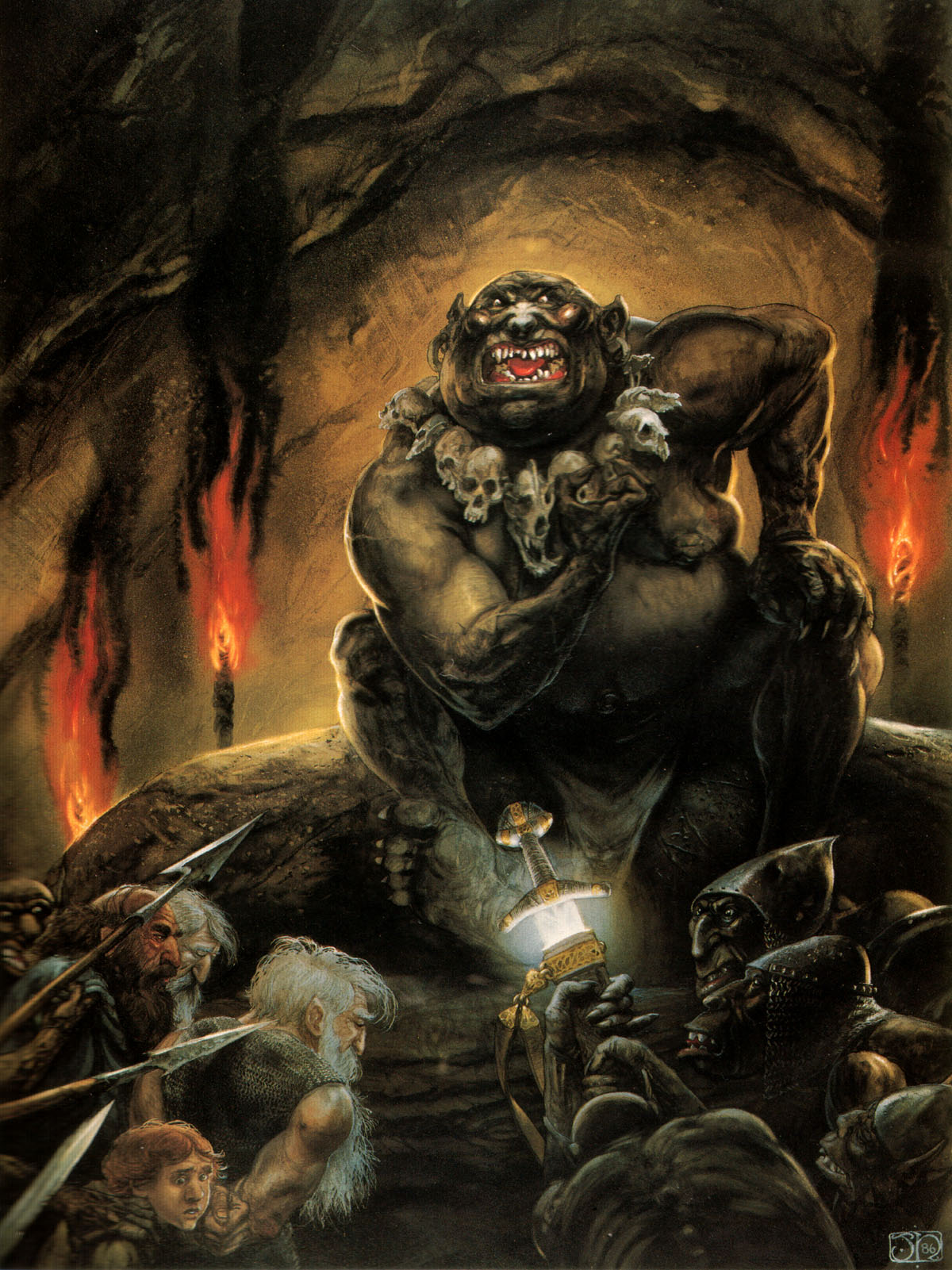 I don’t really know much about the Great Goblin (at least, no more than I know about any other orcs or goblins) but I adore this painting by John Howe. That is not a fellow you would be happy to meet. Goblins are mean. Goblins are nasty. And this is the guy that is so mean and so nasty that the other goblins do what he says. Frightful stuff.

It’s at this point that we learn that goblins have the uncanny ability to immediately identify enchanted swords which were used in a war thousands of years ago and have undoubtedly laid in buried treasure hordes for centuries if not millennia. Gandalf himself needed to get Elrond to carefully examine the blades to identify them but this horde of goblins recognizes them immediately. It’s a bit weird2.

Still, however they managed to identify it, the presence of Biter was enough to incite them to real nastiness. It’s a good thing Gandalf was around to bail them out again! There are definite advantages to paling around with a walking (and almost — but not quite — literal) deus ex machina. I think this is another shining example of how ill-prepared the dwarves really were for this adventure: though they’ve been grumbling about and making fun of Bilbo, they’re not any better at this than he is. The one thing they did was bring a wizard along. And that’s really adventuring 101 (just ask anyone who’s ever played D&D).

Fortunately, they did bring a wizard along and he saves their bacon again. Which leads to one of my favorite comical bits in the book: everyone running for their lives with the dwarves passing Bilbo back and forth to ride on their backs. I really hope this scene makes it into Peter Jackson’s movie. I’d really like to see Martin Freeman tossed around like a sack of potatoes.

Finally, as the chapter ends, divine providence rears her head again and Bilbo is separated from the party. And on such things are worlds changed.

As we close this chapter, let us have a brief moment of silence for the ponies. They deserved better.