Thanks to the magic of the Interwebs, I stumbled across <a href=”http://sensi.org/~svo/glasstty/”>this guy who made a TrueType Font file of the glyphs that a VT220 would draw.

I then fiddled with colors for a bit until I could approximate that amber glow I remember so well from my childhood.

And I ended up with: 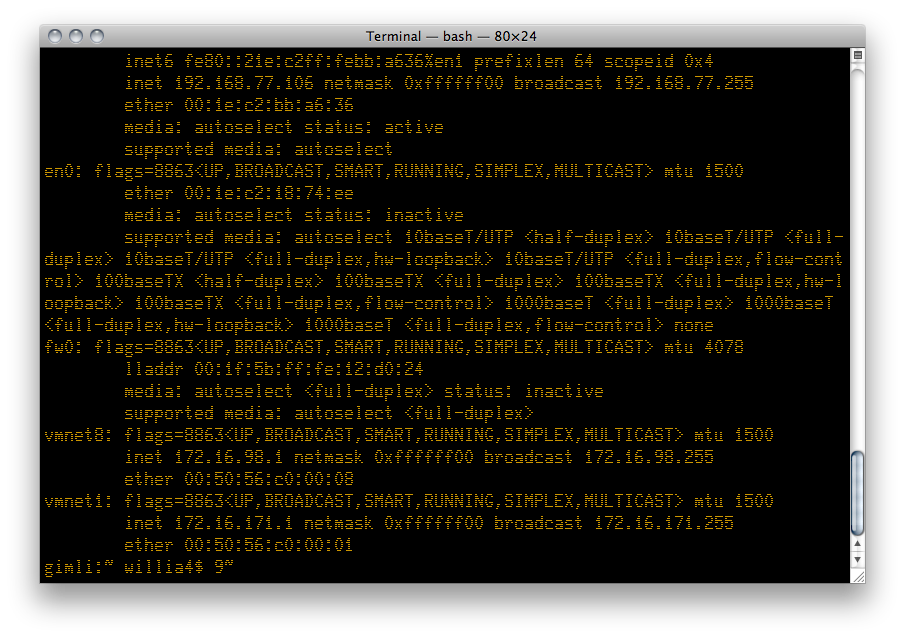 It’s great. The only downside is that the font file creator recommends a font size of 20pt. This makes the window a few times bigger than I normally like.

But I think I’ll stick with it for a while purely for the novelty and nostalgia.

As God As My Witness, I Thought Turkeys Could Fly

Over at Slate, Emily Bazelon wonders what kids get out of magic acks. Her conclusion is that a child simply wants to puzzle out how the magician accomplishes his feats as opposed to sitting back and simply being amazed like an adult might.

It’s an interesting idea (if somewhat under-explored in all of twelve hundred words). Indeed, her notion that a child is only interested in “How do they do that?!” jives with my own childhood. But, as an adult, I ask the same question about a different part of the act.

I really like magic shows. I don’t see many, but that’s mostly because I don’t see many shows at all. If I have the opportunity to go watch a magician, I’ll take it. Even the shows that aren’t particularly good are still enjoyable.

When I was a kid, I also really liked magic shows. And like Bazelon’s son, I was mostly in it for figuring out the mystery. Every time Fox played one of those “Secrets of Magic Revealed By Our Masked Magician!” specials, I’d find myself glued to the set. I’d like to think this is because I was developing an analytical and scientific mind and training it to figure out the curiosities of the universe. It’s more likely that I was just a child and that’s what children do. Ah well.

As I grew up, I learned the lesson that most of us eventually learn. Learning the secret behind a magic trick is almost always disappointing. I discovered that the magic of an illusion is very rarely in the secret.

Penn and Teller are probably my favorite entertainers and so, by rules of precedence and transcendence and all sorts of other -ences, are my favorite magicians. Among other things, they make a point of the fact that the trick doesn’t matter. They even readily demonstrate how many of their acts work. YouTube has multiple examples. And it doesn’t matter. They’re still great tricks to watch. Well, maybe their disappearing submarine isn’t. But I hope you get my point.

So I don’t care how a magic trick works anymore. At least not to the point that I actively try to figure it out. Yet, up above, I said that I ask “How do they do that?!” when I watch a magic act. So what do I care about now, at my advanced age of 26?

It’s the showmanship. With enough financing and a bit of practice, I could pull off most non-sleight-of-hand magic tricks. There’s no mystery there; those are just basic engineering problems. But to put on a magic show? The level of confidence and misdirection and perfect patter required to pull off a magic act is just astounding.

More than that, I can’t even fathom being able to perform like that. I don’t understand how anyone could do it. So I watch it and I wonder “How did he master that?” and “How did they decide that this was the ideal moment of misdirection?” and “Why can’t I see it even though I’ve watched it fifty times and know where to look?!”

And I sit back in amazement and wonder. Heck. It’s enough to almost make me think that magic is real.

More than that, I’m a space opera fan. I have a thing for space ships, whether they’re Federation starships or runabouts, Imperial Star Destroyers, little snub fighters, generational ships, or even giant cylinders sent out by God himself (yeah, I didn’t like the ending of the Rama series either).

I’ll admit: when the camera lovingly pans over the hull of the U.S.S. Enterprise (anyone of them), I get chills. Every time.

But there’s one image in all of sci-fi and space opera that fills me with more emotion than any other.

And that’s a little blue box, spinning through space.

An Open Letter to the Planet

Anyway. I know we haven’t really treated you very well since the Industrial Revolution (personally, I blame the British) and you have every right to be pissed at us. But lately, we’ve been trying. Remember the Crying Indian? That was great. And we gave a Nobel Prize to Al Gore. And have you noticed all the compact fluorescent bulbs that are replacing the old incandescent bulbs in the landfills? See? We’re making an effort.

I think it’s time that we asked for a show of good faith from you, though. I mean, we’re being the bigger species here. We’re slowing admitting we’ve been doing it wrong and are trying to fix it. But why should we go to all the trouble to research alternative energies if we think you’re just going to show us a planet-sized middle finger when we’re done? Seriously. It’s time to show us that you’re serious about working with us instead of against us.

So how about a little fall? Just a few days of crisp air and low humidity? Just enough to show us you’re in the game and then you can start summer early next year.

Come on, Earth. Be a team player.

The power, after all, is yours.